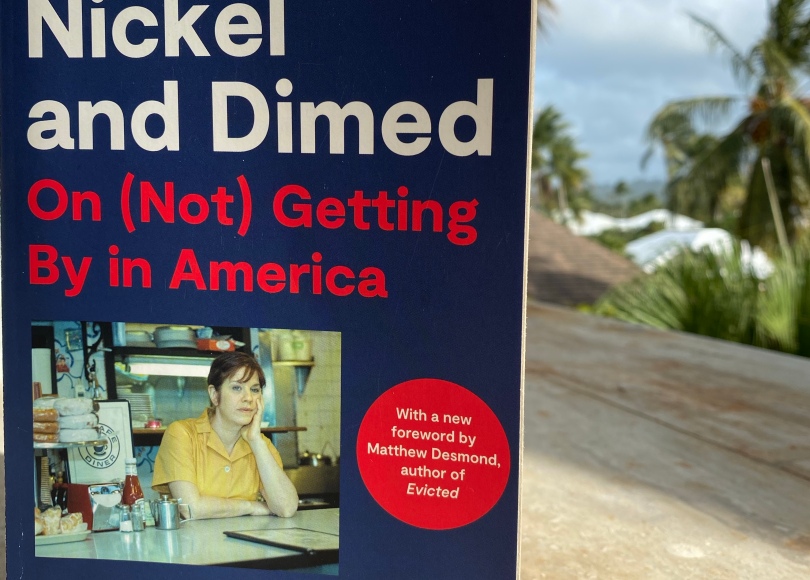 I picked up “Nickel and Dimed: On (Not) Getting By in America” by Barbara Ehrenreich, and I feel a sense of shame, guilt, and hopelessness.

Synopsis: Journalist and research scientist Barbara Ehrenreich goes on an experiment to live on the wages of the working class throughout the United States. She works as a waitress, a maid, nursing home food aide, and retail worker in Florida, Maine, and Minnesota. Ehrenreich lives off of the salaries and reports on her findings.

No surprise: being poor is a lot of work. The author writes how no matter how many hours, and in some cases jobs, the poor working class cannot sustain themselves on super low hourly wages. These salaries offered cannot adequately pay for shelter, childcare, food, and unexpected medical bills.

Ehrenreich writes about settling for cheaper housing in temporary motels; it may be affordable for the moment, but people sacrifice having an actual kitchen or kitchenette with cheap fast food. The long-term effects can lead to diabetes, high blood pressure, and depression.

There’s also the idea of invisibility that these people have among the greater population. They work all around us, but do we acknowledge their hard work in our own lives?

Matthew Desmond (author of one of my favorite books, #Evicted ) wrote a new forward for #NickelAndDimed , and though this was initially published in 2001, everything remains the same, he infers. In 2021, as states around the country lift #Covid restrictions, employers are having difficulty filling positions. The Federal Government’s temporary assistance means some ppl make more money staying home than working their bodies to the point of physical exhaustion that doesn’t pay enough for living expenses. Solution: pay ppl what they can live on, you know, a livable wage.

There is no small solution, but instead, this book should provide a conversation starter about wages, the working class, and inflation.

No rating; this is a classic. Please read.